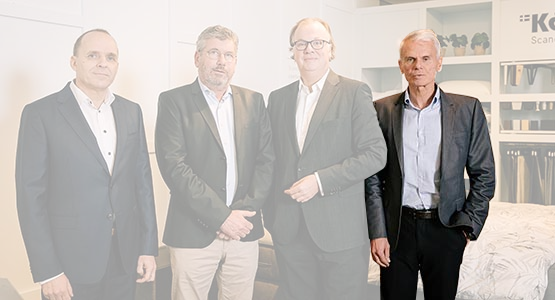 From left to right: H. Vermeulen, B. Karis, P. Boone and A. Beyens

He is CEO of Bol.com since 2017, whereas he previously was employed as COO. Before that he worked in various management positions for DOCdata.

Mr Karis concluded a tourism study after which he joined Dorint Group in Germany as Sales Manager Benelux in 1983.

Subsequently Mr Karis fulfilled several positions at Vroom & Dreesmann and Ikea, from 2000 until 2004 he was Vice President Ikea Retail Europe and from 2004 until 2007 he worked as Senior Vice President General Merchandise for Ahold. Until 2017 he acted as Chief Executive Officer and Chairman of the Board at Zeeman Group B.V.

Mr Karis serves as a Supervisory Board member at Sligro Food Group.

Mr Boone earned a degree in Business Economics & Administration at the EUVA (European University of Antwerp) in 1992. In 1999 and 2004 he completed a Management Development Program for high-potentials at respectively Nyenrode University and SHV.

From 1992 through 2010 he worked for Makro (SHV Holdings NV) in various (inter)national management positions, after which he was employed by Metro AG in Russia as CEO. As of 2015 till recently Mr Boone was member of the Management Board of Metro AG where Mr Boone fulfilled the role of COO. He was also a member of the APA in Germany.

Mr Beyens earned a Master of Science in Commercial Engineering at Brussels University in 1984 and a MBA degree at the University of Antwerp in 1991.

Since 1985 Mr Beyens has worked for Ab-Inbev in various international management and executive positions. In 2012 as CEO at Starbev he accompanied the sales of MCBC. Until 2017 he was employed as CEO at Pelican Rouge.

Currently Mr Beyens is Operation Partner at Mid Europa Partners. In addition he is non-executive management board member at Duvel Moortgat, Chairman at Moji Brendovi, Hortex and the Antwerp Management School.